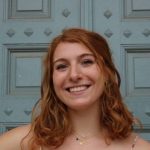 Mick is a first year Advanced MSc student in International Relations and Diplomacy at Leiden University. Mick obtained her Bachelor degree at the University of Texas at Austin, double majoring in Sociology and Middle Eastern Studies. With a minor in journalism and a focus on gender studies, she has also developed an interest in injustice and the role of the media.

With a background in political science and specialisation in the Middle East, Mick hopes to combine these two during this internship. Her aim is to look at the issues such as social exclusion and radicalisation from a cross-disciplinary perspective. She is particularly interested in conducting research on religion and integration, as well as working as part of the communications team of DRIVE.

Mick is very excited to participate as a research intern at the DRIVE project and at the Leiden University Institute of Security and Global Affairs.